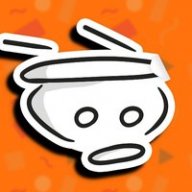 
Ogle: The Return of Morcalavin

Perhaps the biggest addition to gameplay is the grappling iron, coded by Talon and modeled/skinned by Heretic Hides. It allows the Ogle to latch onto nearly any wall a certain distance away. The grapple is given to the Ogle early in the game so that the player can spring out of harm's way when necessary. Some areas, though, like cramped areas, offer no escape.

You'll notice that the game is only playable on difficult mode. I made this choice for a few reasons. First, a meager creature like an Ogle has no business taking on those significantly more powerful than himself. Secondly, each monster is given more "personality," if you will, when strategy is needed to kill it.

I wanted the monsters to feel embedded in their environment, like they know the area better than you, because you're just passing through. Certainly they know how many of themselves are needed to stop you from continuing on. This is what I'd call "emergent AI," or the AI that can be created by intrinsically tying a monster to its environment (instead of relying on coding in the monster itself). Given that Heretic II is a fairly old game, I hope you'll notice my philosophy at work on this aspect of level design.

The last thing I'd mention is that I cut quite a few corners to move the story forward, lest everything would have taken months and months longer (I started this project, I think, in late 2005, and worked on it whenever I had time). Also, my sister was getting kind of weary of coming in for changes to the script, and the High Priestess plays such an important role that the story sort of pended on her.

Nonetheless, the game covers a scope as of yet unseen in any Heretic II Single Player release...and I have a deep affinity for the few H2 SP's out there.

So have fun and enjoy the nostalgia!