It has finally come down to Hell. One can't help to feel that Hell is the most sought after piece of Phobos. The Hell portion of Doom3 was criminally short for most people's tastes. I myself however found it to be rather dull the first time around. It actually ended up feeling like several maps instead of simply just one. While I have come to appreciate that one map a whole lot more over the years, I still think it was a bit of a failure.

So, what does that mean for the Hell of Phobos? Well to begin with. Colors are a more prominent member of Hell in Phobos. Still not to the level of the original Doom mind you. After all we are trying to stay true to the source. But it will be a lot more varied and vivid than the caves and plateaus you explored in Doom3. 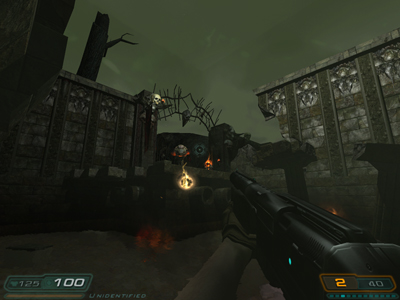 A lot of the level design for hell stems from original Doom level design principals. While we're not trying to mimic the game play of Doom, since we find that pointless. We are doing our very best to rival the quality and variety of it, and carry over things that we think fit well with the game we are making.

The story will be cut down for this episode as well. The story will keep on until the end of course, but since being in Hell is mostly about getting out. Survival will be the No.1 component. You expect to get hell, and you will get it. 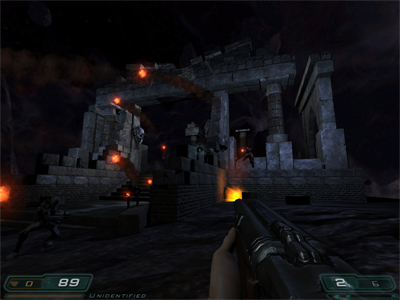 Hell is naturally a lot more organic than the cold steel of Mars and Phobos space bases. This means we have to work on a drastically different way for most of the time. A major component of the world is made up of models instead of the commonly used brushes and patch meshes common to the Quake-Doom3 engines. Most of it can simply be built using low polygon models, but anything that is of special character needs extra work in getting the proper fitted normalmaps. For instance, every demonic face needs a hi and low polygon mesh to complete the process. This is naturally, not a process that is limited to Hell alone. The other episodes will have these things too, sometimes the regular level editing capabilities just isn't enough. But not nearly at the same degree. 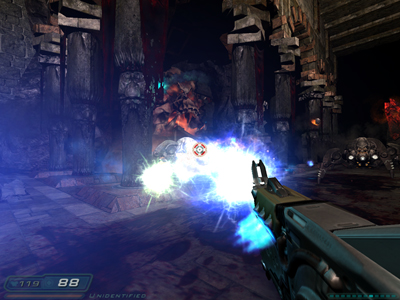 
Yesterday I played around with monster spawning for Doom 3: Phobos. I wanted to change the teleporter, or spawn-in, effect of the monsters. The problem as I and others on the team see it is that you get too much of a warning in Doom3 when monsters spawn in. A break-down of the effect would go as follows;

3) Strike the ground with a bolt

4) Spawn in the monster

The duration of this process is what bothers me. It takes between 1.6 and 3.6 seconds for a monster to spawn in. This fact alone makes the spawning monsters a useless feature, in my opinion. The player gets a warning as well as a detailed description of where the monster is going to teleport in. AFTER the couple of seconds, the monster will then have to land and scream at you. 4 or 5 seconds can easily pass before the monster is ready to claw at you.

Compare this to the old doom where an imp could teleport in with a "BZZT" and attack you instantly. No warnings, no delays, just 100% surprise and fast action.

I wanted to replicate this effect.

The first place I looked was in the teleport.fx files. These control the sequences of the spawn-in effects. It all made sense in there. There were delays, durations and references to different particle effects, lights and models. "Easy", I thought and for proof-of-concept I tried to delete everything in the fx. No go. While all the particle effects and lights were gone, the imp STILL took its sweet time spawning in. This sent me on a wild goose chase in the SDK. I couldn't find a variable for this delay anywhere and after a couple of hours in the SDK I tried to look elsewhere. Apparently the delay is a hard-coded value inside the base AI script for monsters. Kind of backwards and hacky if I may say so. I removed this delay and finally the imp could spawn into the area in all its instant-action glory.

The reason I've been playing around with this is because E1M3 has reached the internal demo phase where we pretty much just need to place enemies and items. While we already went through this process during the equivalent phase for E1M2, this still feels new for us and we are going to spend some time the following weeks experimenting with it. Even though we have a clear-cut vision of how the mod should play, we still need to spend some time getting there or even learning how to get there. The last thing we want is for the monster placement to become an after-thought. This needs to be done right. Doom3 never really went far in the experimentation of the combination of different monster types. How often did you encounter melee enemies AND long-range enemies at the same time? How often did you need to find cover? Were imps used for mainly melee or ranged attacks? How can we improve on that? These are some of the questions we're exploring the answers to.
Clicca per espandere...

We're back with a small media update and a note on how the mod is progressing. Earlier this month we finished E1M4 for the internal demo and have moved on to E1M5. M4 was created practically from scratch in, for us, record time. Moving on to the next map is going to be yet another challenge for us as it's a completely different style. The map portrays a dig site with a lot of caverns/ancient styled locations. We have had Gait working on it for some time and now he will be joined by two additional. mappers. There isn't a lot more to say at this time. We're working extremely hard to bring E1M5 up to speed and we'd rather be doing that than writing up devblogs, so instead of a long boring rant we'll throw 5 brand new screenshots at you.

We have taken in a few new members in the last couple of weeks. More to come on these in the future.
Clicca per espandere...